The Pay Off: Hanani Update

To say I am humbled at God’s creation is an understatement. I tend to be fairly hard on myself at times, especially when it comes to my dogs. When they behave like asses, I blame myself because I know I can be lazy–even with stuff I enjoy. But today… Oh my gosh. Today I got the pay off I never expected. Here is an update on Hanani and how far she has come.

Over the past several days I have been testing Hanani, to see where we are and what I can do to challenge her more. Of course, I usually feel like I am not doing enough with her. We do the usual–scent source in buckets (such as in the previous video) or hiding sources around the house and yard, hiding the sources in different places each time.

A little more than a year ago we started imprinting with charred flesh and later with ancient bone and body fluids. She is familiar with our yard and home, so I expected her to do well when I timed her search. But never did I expect her to do as well as she did!

Almost half our half-acre yard is fenced, so we can work off leash. I like that because there is less opportunity for me to unintentionally cue her to the source. In other words, help her cheat 😉 Her search times ranged from 2 to 4 minutes! A little while later, in the unfenced area, I hid the charred flesh in our fire pit in the middle of the yard. I started her at the far end of the almost 1/4 acre lot and gave her the command, “Find Boo!”

It took her 3 minutes! We played and I distracted her with my husband a bit and then gave her the command again. It still only took her 3 minutes! Later, in our basement with lights out, she located the first source in one minute and the other, hidden in a couch, in three minutes!

Sometimes I hide stuff in my car and let it sit, windows up, in the hot sun a few days. This time it was a new source: A towel stained with moderately fresh blood. Hanani indicated at my car, with doors closed and windows still up, within 3 minutes! She seems to like three? 🙂

I am humbled to be entrusted with such a magnificent beast. Sure, she needs more experience. Needs bigger challenges and real-life scenarios. Still, I am amazed at God’s creation and handiwork.

Not far from the quaint, suburban town in which we live is a beautiful stretch of land along a main road. This acreage is used now as a park with hiking trails. Tucked out of the way off the main path, is an area where an unknown number of deceased were buried many years ago. Three graves are marked. Two of them are a considerable distance from the first one, which is of an unknown person. This site is just behind where the old Summit County Home used to stand.

At the entrance is this plaque commemorating the site. 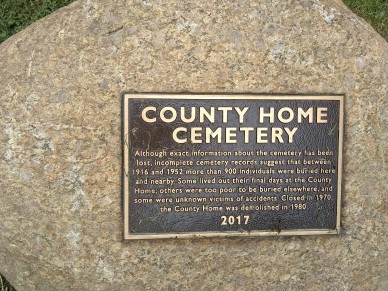 Hanani had never been to this park or site before today.

I always thought of taking her to this site to test or train her, but always talked myself out of it because I truly didn’t think I knew what I was doing. I did not want to set my pup up for failure. But today I sucked it up, got our gear and headed on over.

As soon as I took Hanani’s harness from the hook on the kitchen wall she was all bouncy bonkers! She knows it’s time to “work” when the harness comes out, and boy she loves to work! From what I know, that is a sign that I have done well to make training fun for her. Next, all geared up, she sat at the door–waiting for me to walk through first. Then she sat while I shut and locked the front door. I did not even have to tell her. She sat again while she waited for her cue to get in the car. After she happily jumped in we were on our way!

We had some errands to run first and as we did, she was the best behaved I have experienced since bringing her home. Even when we were at the shop where my husband works, with all the noise, strange sounds and smells, equipment and cars, she just sniffed around the air and kept her eyes on me. All the while on our errands, each time I opened the car door where she sat she did not move unless I cued her.

Granted, I am taking much time with the step-by-step details. It’s only because I am attempting to share with you how consistency pays off. I am in the clouds right now and have not come down since we returned home from this site. Hanani has trained on partially buried sources. With that I usually use the ancient bone, since the focus of our work will be ancient remains. She signaled within two minutes in our yard when I tested her on that recently.

But that’s a far cry from jumping right into a site where God only knows exactly how many are buried or how far down. Like I said, there are only three graves marked there. We entered with her harnessed on a 25 ft. lead, which I loosely held and just let her work the area. It’s simply amazing to watch her work! Her entire demeanor and all body language changes when she catches a hint of the scent. The way she can narrow down a large area with such ease just blows me away! My pup was so excited the entire time, working hard, and it was like she was trying to show me how all our hard work together has paid off.

In the field, so I am learning, there are obviously more distractions–sounds, smells, even trees can throw dogs off. In 2-3 minutes after entering the site, Hanani indicated and dug her nose deep into a tree stump and around the bottom, a bit up the trunk of another tree near the marked grave. But she kept moving, working the site to find the source. You can see in the photo above, the tree not far from the grave and the stump way over to the right. I let her search anywhere she felt lead to and watched closely. We were all over that site, about a 1/2 acre, but my pup kept returning to the area around the unknown grave.

Finally, approximately nine minutes after giving the first command, she alerted right on the marked grave of the unknown person. We danced, I praised her and almost cried! And, of course, she got cheese! She only gets cheese when we work 😉

Please forgive me that we were unable to video this testing session. Mia does not have thumbs! And I do not have a cameraman. But take my word for it, even after all these years training dogs, I am still amazed at what they can–and will–do for us when we are consistent and make it fun for them.

Thanx for hanging out with me here today! And please comment below. I will be sure to share your encouragement with Hanani!